﻿
We’d like to report the results of “Variety Ranking Board” which we placed in “Lily Fair June”.
Each participant had 10 votes, and they could place 1 vote for 1 variety.
The total number of the votes through 4 days was 11,512.  We very much appreciate all the participants who joined this new event.
The following is the results of “Top 10” of 511 varieties.
We collected the data of growers, auctions/florists, and consumers separately.

While the standard varieties such as “Siberia” and “Casa Blanca” got many votes steadily, new non-powder variety “Vendome” which is gradually spreading in the production and the market also won high ranks. “Skymaster” which we tested for the first time received big attention as “white non-powder Oriental”.
Pollen is one of the characteristics of lily, and sometimes it can be a difficult aspect because it stains petals, hands, and clothes. Non-powder varieties can be a good opportunity for people to use lilies more freely not caring about such things. 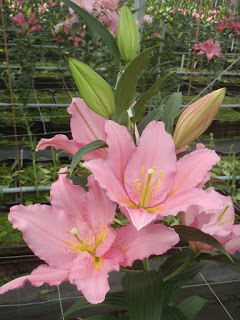 Double varieties were popular, too. “Samantha” and “Aisha” from Rose Lily series and Asiatic “Mystery Dream” and “Tiny Double You” won many votes. We saw many comments about the beauty and gorgeousness of double flowers in the paper questionnaires as well. We placed many flower arrangements of double flowers on tables in the event place to introduce the use of double varieties, and we believe that it was one of the factors of the popularity.
Double varieties match bouquet and compact flower arrangements which have been said to be not for lilies. We think that double varieties have potential to widen the use of lilies. 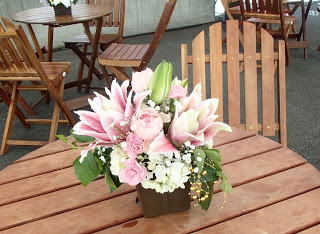 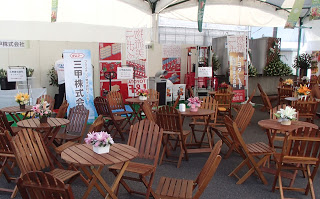 We made an exhibition to introduce “lily’s scent” this year, and the variety which was popular in the “scent” section, “Nymph”, got into the high position as well. Nymph’s scent is very nice.

Non-powder varieties and double varieties were especially popular according to the result, but at the same time, some of new Orientals and new OT’s which have Oriental-like shapes received attention.
Many attractive varieties will appear in Holland and come to Japan from now on, too.

It is important to decide what to choose from those new varieties, and develop the flow through production, sales, and consumption. Let’s start to move together for “lily’s future” of 3 years later, and 5 years later.

You can see the variety photos on the database in our website.
Please feel free to contact us if you want to know about the varieties.