Thank you for your cooperation,
The autumn equinox has passed, but the hot days are still going on. Please pay attention to the temperature and soil temperature, although NL crop 2018’s Oriental OT planting is frequent.

① About 2019 Dutch production
As you can see from the climate graph below, in the Netherlands this year, the month excluding May has exceeded the average monthly temperature of the normal year, and the amount of sunshine has been increasing since the planting time.
This September is said to be the month when the bulbs are growing, and the Dutch bulb producers and exporters’ suppliers are going to the bulb fields and conducting a trial digging survey. 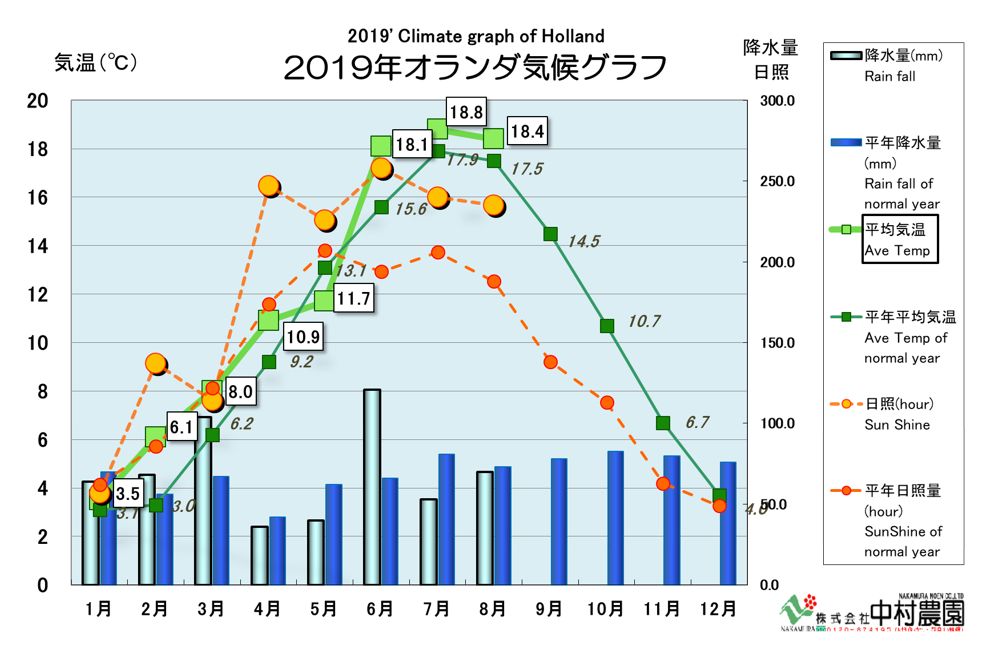 The table below summarizes survey reports from the Netherlands.

※① During the heat wave in late July, the temperature reached 39.3 ° C in Eindhoven, Southern Netherlands, and recorded the highest 40.7 ° C in the country’s observation history in another region of Southern Netherlands.
※② On the day when the high temperature continued, some of Oriental 1 year were burned intensely, and Some are not expected to grow later.

There is no problem with LA and OT.
The field survey in September has a lot of regional differences and blur, and there is a part lacking objectivity.
The impression of enlargement is…

LA：Normal to good
OT：Normal to good （Some are very good）
Orientals：Normal（Somewhat bad）～Somewhat good
This year it is enlarged compared to last year when it did not almost grow in summer.

Currently, warm autumn continues in the Netherlands, and steady growth is expected to continue.
As for France (which has a lot of production of Longi), it has been reported that it has been delayed for several weeks due to the cold in early spring.
Regarding the sales situation of bulbs, As for the main varieties such as Siberia, the world demand increases according to the production area, Bulb growers side are sold out and prices are on the rise. On the other hand, low-priced varieties have remained at low prices since spring, making them easy to purchase.

② Imports of Southern Hemisphere crop 2019
As introduced on the website, the number of imported bulbs in August was about three times that of the previous year. Our trend is similar, with an increase planned for September. Last year, in addition to the lack of container preparation by shipping companies, the schedule was delayed due to the typhoon, the total number of imported bulbs by September in Japan was 38.7% compared to the previous year (2017). This year, imports are as smooth as normal, but there are some that were slow to harvest due to varieties and lots. We would appreciate it if you could contact us and confirm the delivery instructions. Regarding the change in the consumption tax rate from next month, the shipment date will be the sales date (consumption tax is recorded) when the product is shipped from us.

A survey of the southern hemisphere crop 2019 sold to Japan was conducted as follows. (Survey in early September)

The number of imported bulbs of Southern Hemisphere crop 2018 (Statistics of Plant Protection Station) was 21,327,345 nearly the same number of imports are planned this year. (LA is expected to increase, while Oriental OT is expected to decrease slightly)
Thanks to you, our orders increased by about 4% compared to the same period last year and about 40% of the number of import will be handled. I would like to express my sincere appreciation for your support, and in the future, with the cooperation of related companies, we will strive to improve the efficiency of purchasing and transportation and to provide better services in order to improve international competitiveness.

③ Dutch crop 2018 late forcing test
At our test greenhouse, following the midsummer heat test, A large-scale late forcing test planting has begun. It becomes a cultivation environment that assumes the end of the year cutting in warm areas, and Autumn cutting of summer production area, It is a test of more than 400 varieties including many double. It’s one time planting per Hybrid group, and The flowering period is scheduled from mid-November to early December. (The photo is taken on September 24)

By the way, we had delivered our design notebook until last year around the time of flowering of the late forcing test, but this year we decided to stop production at the end of Heisei.
Thank you for your continued patronage for many years.
In the future, we will work on the development of novelty goods that can be used by everyone! We look forward to your continued guidance and encouragement.
Thank you.