I went to New Zealand from January 11th to 13th to visit grower companies there and research their fields.  Here I report the trip.

The graph below of the monthly temperature and rainfall shows that the temperature has been higher than usual years, and the rain in November was considerably little.  At Christchurch Airport which is about an hour from Rakaia (the main bulb production area of the South Island) experienced 47 days of no rain at all through November and December, and this November became the driest November in the recorded history of 100 years. 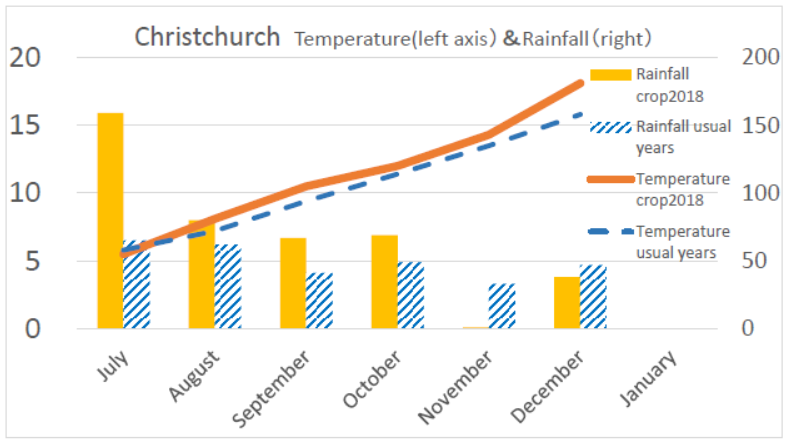 This result was same in Hastings in the North Island where Island Bulbs locates, and they said that they did much more irrigation than usual this year.

The grower companies gave me a lot of help, and thanks to them, I could see all the fields of sales bulbs.  The stems above the ground seemed a little low, and the bulbs’ swelling also looked comparatively slow when I checked some bulbs which were dug out for test to see the growth and roots.

In general, it is said that the artificial irrigation is not enough for the bulb growth, so probably the bulbs stopped growing temporarily in November.

The point which caught my eyes during my research was roots.  I expected that the roots would be brown and weak because of the dryness, but actually many of them had white new and short roots or also white thick, strong ones.  I learnt that the effort and appropriate management of the growers reduced the bad influence to the bulbs.

The temperature has been rather high since spring, and there is no delay in growth and disbudding.  It will be the middle of summer soon.  The rain started to fall largely from the later December, and now in the first part of January has been comparatively cooker.  To see only this pattern, crop 2018 New Zealand can be like crop 2017 rather than 2016 which had many bud counts.

As I mentioned in my New Zealand report of July 12, 2017, the growers in the south Island started to do “winter planting” in recent years, and some of crop 2018 bulbs were already planted in July.  Such crop is early in sprouting compared to the usual September planting (spring), and it becomes more like 2 year crop’s growth schedule.

This year, those bulbs suffered an unusual accident.  In Rakaia, there was a big rain of more than 120mm in 2 days in later July, and the water in the mountain spilled over and made a small river.  A part of the bulb field was washed away by this river.  The local people call such rivers which only appear in unusual weathers “Dry Creek”, and it happened after more than 60 years.  The river ran on where a tractor was in the photo in my last New Zealand report.  It happened before the bulbs started to grow, so other places had no damage and it was all cleaned up as the photo below.

In New Zealand, January to the early February is the summer vacation season of schools.  The time I visited was full of people everywhere such as airports and towns.  New Zealand is popular for tourists, and it’s not cheap to live in New Zealand due to the recent price raise (ex. A 500ml plastic bottle of water costs 3.2 NZD / 250 JPY at a take-out shop), but it was indeed a very beautiful and relaxed country.