I visited New Zealand from January 31st to February 2nd for field research.  I’d like to give you a brief report of the research below.

Little sunshine and fluctuation of temperature

The weather in planting time was good in the 2 production areas of New Zealand, Napier in North Island and Rakaia in South Island, and the planting was done smoothly.  However, from September, there have been many cloudy days which means that sunshine duration is short (Please refer to the graph on the next page), so feeling temperature is low.  In addition, the temperature changes drastically with strong wind, and some growers say that this year is unusual.  Indeed my first day in Napier was over 28 degrees which I needed to take a drink and rest, but next 2 days in Rakaia came down to 11.8 degrees, so I put the jacket on during cold field check.

Some growers comment that enlargement until now is 10 days delay comparing early growing last season.  Actually, some fields partly got damaged by frost and hail in spring, but influence is limited.  Most varieties grow well in summer this year.

During my visit in New Zealand last time, some varieties and lots showed virus symptoms.  Although subjects were not solved completely, this time I recognized that each growers are getting improved.

In 2016, current quality checking method were established and conscious growers renewed planting lot to be clean.  Most planting materials are produced in Holland, and then imported to New Zealand to grow further.  There is some way to boost the quality improvement, which is to harvest planting materials in Holland in autumn and import soon, ten plant again in November.

However, demand for mother bulbs for scaling rapidly increased in last some years, and it’s getting difficult to gain the completely clean stock nowadays.

Even conscious growers sometimes have to accept to plant low infected planting stocks.  Due to such situation, consequently growers decided to destroy some planted lots which may spread the infection.

Our company requires exporters and growers cooperation not to deal those lot, also exchange the quality information from our test greenhouse’s results to ask them further quality improvement and stability.

Schedule of my business trip this time was same period as Chinese New Year, which is the most important holiday for Chinese people, and I could see many people in New Zealand for vacation.  I was surprised to see Chinese tourists even in Chile which is the opposite side of the earth as well.

These days, Chinese trend draw the attention in lily bulb industry, too.  According to official data, imported quantity to China in 2016 was nearly 320 million.

Chinese New Year is one of the most important demand for cut flower.  Which to use for the big demand, Northern Hemisphere or Southern Hemisphere bulbs, can change the demand in the industry dramatically.  Chinese New Year in 2017 is January 28, and the next year 2018 is February 16.  That means that SH crop 2017 is demanded a lot by China, and that’s why it will be a difficult year for Japan.

On the other hand, variety assortments in New Zealand’s production is related to Japanese market because it is one of the important market which is estimated to be stable growth.  Our purchasing is progressing with your support.  We do the best with all our staffs for it. 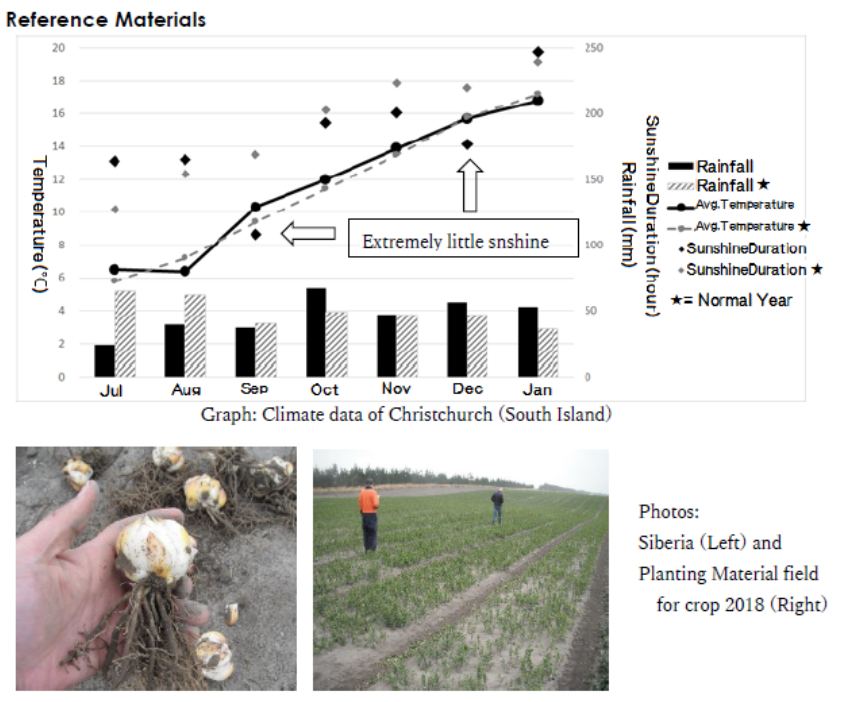