Thank you for your cooperation.

While we see typhoons making troubles in many places this year, I feel that the economic damage by high temperature by La Nina was also serious.

Global Warming is not only in Japan, but it also has become a major influence in the bulb production in Holland.

Herewith we report the climate in Holland briefly.  Please refer to the following “2016 climate graph of Holland”. 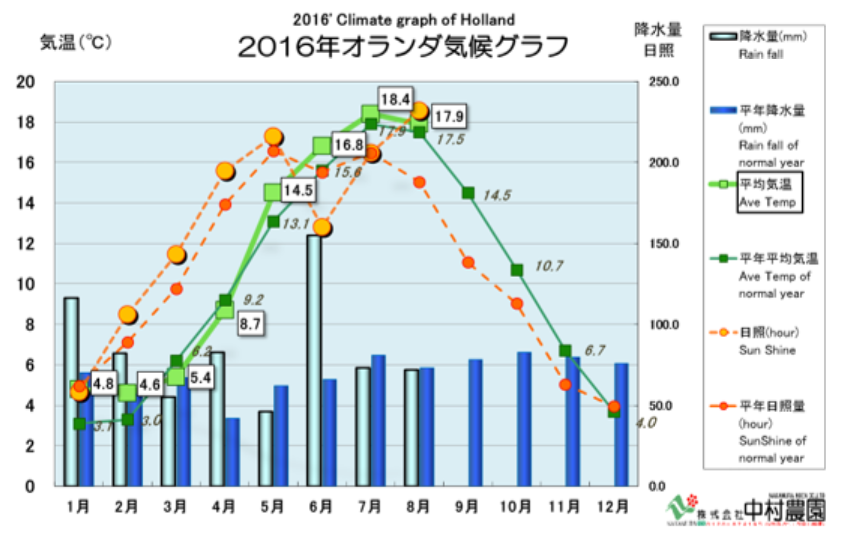 In Holland, in March-April, it continued to rain at low temperature, and planting was delayed in general.  However, planting were finished within April, then May had been good weather with good temperature and sunshine.

It continues to rain especially in South Holland (north Limburg area) in June, and some fields went under the water regionally.  According to bulb grower’s information, the situation was not same in different places.  For example, the rain was just a little in a few ten KM away.

In recent years, rain fall that falls at once is increasing in Holland, for example, more than 200mm rain fell in a period of July last year.

There are some districts and growers suffering the flood damage every year, so big rain should be counted as common and we hope that they will manage better land with lower risks.

Following is the summary of the report from Dutch exporters at the point of first half of September.

First 2 weeks in September were very high temperature, which broke many meteorological records.  It was abnormally high temperature like 33 degrees C in Limburg area.  (Temperature of the sea near Spain is 2 degrees C higher than usual, and warm air with moisture flew to Holland.)

France is terribly dry and hot, and enlargement of bulbs are not in progress yet.  It is too early to judge the result because the situation can change completely in the next few months.

NOP (North Oost Polder: Amsterdam northeast of reclaimed land) is the production place of LA.  The growth and prediction are good especially if the current good weather continues.

(Asiatics varieties which are aimed to be smaller sizes were already mowed.)

Planting was delayed, but growth is well.  Bulb growers are now considering whether they should mow the above-ground part or not (in order to stop the enlargement).

50-60 Ha in the Limburg area were gone by the heavy rain and hail.  In addition, surrounding 100 Ha are not good in growth, and evaluation is difficult but we expect 10 to 40 % of the production cuts.  In other areas, the growth is good and they already started mowing the above-ground parts while the leaf color is sometimes pale.

Production area of lily bulbs in South Holland is approximately 1000 Ha, in Brabant 200 Ha and Limburg is 800 Ha.  Growth in Brabant area is “usual” or “good”.

The growth is good in general in Holland, and it seems to have covered the loss from the weather damage.  Further, by the weather of September of this year, growth will continue.

After the harvest in June-July, bulbs are arriving in stock more and more, and delivery to customers began.

To investigate the Chile and New Zealand (expected) import amount, we gave a questionnaire to the export companies handling bulbs for Japan, and here we introduce the answers.

The table “year-on-year %” is the comparison with the same questionnaire result of the end of August last year. 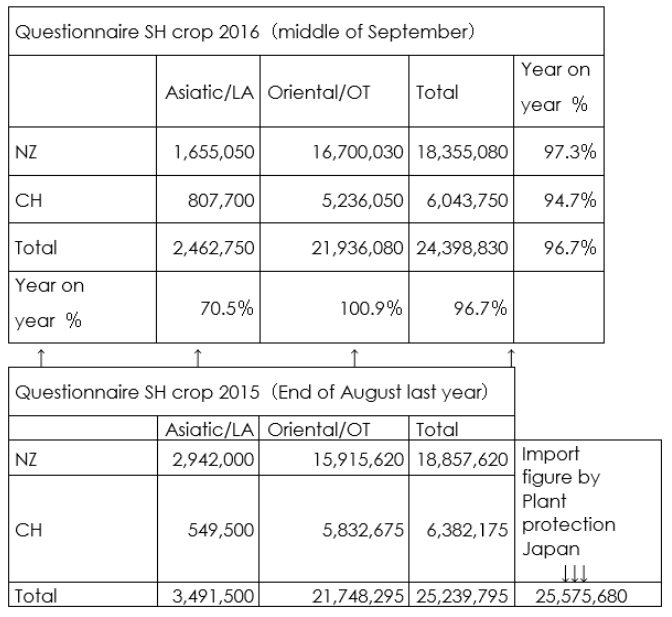 LA from NZ had shortage due to too much enlargement, and it saw decrease of approximately 1 million pcs on the table.

(Besides, impression of LA from NL crop 2015 was not enough.)

In the past few years, lily cut flower in the winter time was balanced between supply and demand, and the price has been stable.  Maybe that’s because everyone doesn’t concentrate on the demanded weeks or special days too much, and the production has been stable.

Typhoons should be making extra works or interruption of planting, so it might be good to proceed your schedule a little.