Thank you for your cooperation,
I went to the Netherlands in early December to conduct a survey of the fields and harvesting, the quality of bulbs, and also the bulb grower’s situation, the export company’s arrival status and the process of commercialization, and so on. 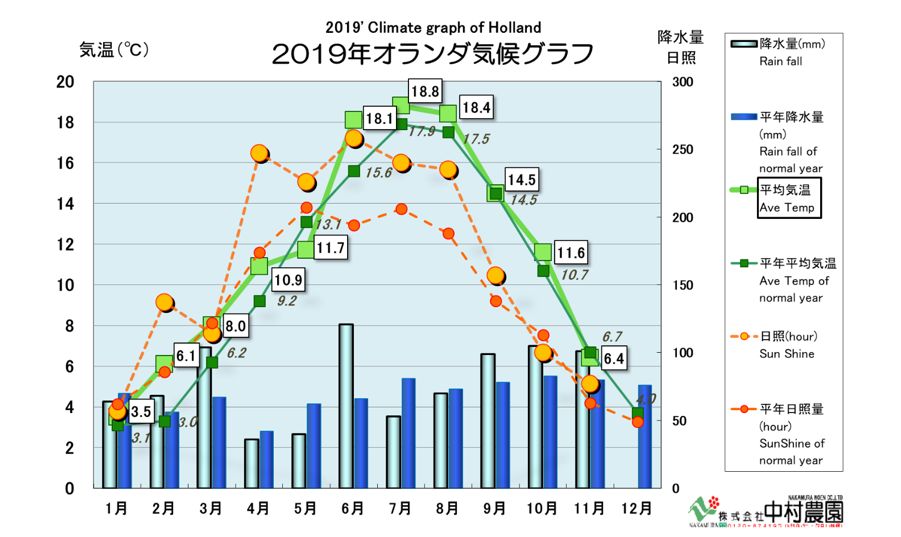 Last year, the summer heat lasted long and it was warm until November, so the old stems in the field did not die and the harvest was delayed. In addition, the surface of the bulbs dried due to little rain during the harvest season, and the number of wounds caused by harvesting increased, regardless of the variety, and mold and rot occurred during the late planting period.
In 2019, the temperature has dropped in September, the above-ground parts have died earlier, and the intermittent rains during the harvest season have reduced the number of wounds because the bulbs have been wrapped in soil and harvested. The week we visited happened to be sunny, but this year’s harvest season was generally rainy, especially in the NOP district of northeast Amsterdam, where LA is produced many, and the harvest was delayed due to heavy rainfall. There were varieties that did not arrive at the export company even after entering December.

② Short due to missing (?)
For the short varieties (lots), the word “missing” is used in Dutch descriptions in last few years. Usually the quantity become less than expected mainly for big size due to lack of enlargement. But when it’s of “missing”, bulb is enlarging, but the grading result is much less than the number planted.
In this field survey, when conducting test digging, we checked enlargement, which bed indicates the size of planted. On average, enlargement is not a bad result, and many growers we met said it’s relatively good when visiting, and this point is also consistent.
However, when I heard the results of the early harvest varieties (mainly LA and OT) that arrived at the export company, they said that there was a short.
Although, some people joked “Isn’t the bulb grower resold somewhere?”
This year, especially in LA, there is a tendency to “missing” and there are many shorts. In South Europe and South Asian countries, demand for LA 16-18 and 18-20 has decreased, and bulb growers have started dense planting to produce mainly 12-14 and 14-16, where stable global demand is expected.
There are various theories about “missing”, but plants affected by the low temperature in May and heavy rain in June are unable to grow due to the dense planting and it disappeared in the high temperature and dryness of summer, said person in charge.
A well-grown bulb had good enlargement due to the surrounding space.

③ Sprout survey and characteristics of this year
The following table is comparing the average data of the OR/OT surveyed this time with the data of past two years. The picture on the right is a sprout near the average of this year’s sprout formation survey. 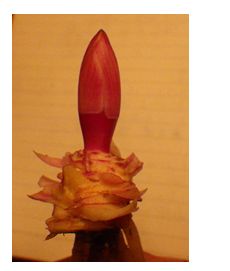 One of the characteristics of Dutch crop 2019 is the large number of inner scales. The larger the number, the easier it is to enlarge, and the slower the dying of the above-ground part, the more likely it is to enlarge.

Another is that the stem length is short. In particular, there is a big difference compared to crop 18, which had high sprout. Although the sprout width is slightly narrower, the bulb power is estimated to be close to crop 17 from the matureness of stem.

④The impact of the collapse of the OT bubble and rising transportation costs
Conca d’or and Robina, which have rapidly expanded their production areas in the booming Asian economy, crashed in late 2018.
Prices have started low in 2019, but the production area is still increasing significantly, making sales difficult. The future of the two major varieties that have led the Dutch bulb industry has become uncertain, and the mood of the bulb growers concerned has not been good, and severe opinions have been heard about the production costs.
In Japan, transportation costs have risen several years ago due to the increase in online mail-order, which is a difficult environment for bulb companies. However, transportation costs are becoming a problem in the Netherlands as well.
In particular, French production is costly to transport bulbs to the Netherlands, and some Dutch bulb producers, who contract production in France, have been told to stop or reduce production in France from 2020.
The back ground is…
(1) The climate of the Netherlands has become warmer and more sunny like France due to global warming,
(2) Regulations on pesticides in France have made it difficult to control mites and aphids (the transmission of viruses).
In addition, the chemicals that can be used will be further regulated from next year, and there is a risk that quality concern will increase.

With the unstable climate, the buyer of the export company said, “Because French harvesting is later than in the Netherlands, there is a risk that it will not be possible to fill up for shorts.”
In Japan, when Siberia from France was big short, there was an extreme bias toward alternative varieties in past.

⑤ Impact of environmental policies on industry
While we were visiting the Netherlands, the Climate Change Conference (COP25) was taking place in Spain. There is a very high conscious of global warming in Europe. Germany and the Netherlands have moved away from coal and natural gas and are switching to renewable energies such as wind and solar. On the other hand, France is likely to move further toward nuclear power, which emits less CO2.
The Netherlands has a long history of wind power, but the installation of solar panels has surprisingly progressed in recent years. The photo below shows a vast solar platform on farmland.

It has spread so quickly that the power generated in rural areas may exceed the transmission capacity to the demand area, and additional installation is not permitted in some places.
In the future, the Dutch government will change the speed limit on highways from 130 km / h to 100 km / h depending on the time of day, which is likely to affect the life of citizens. Inspired by the reduction of CO₂ emissions, bold policies have been put forward for preserving the natural environment. Especially for strong herbicides and pesticides are regulated, and the use and frequency of other products are also limited. It is necessary for bulb growers to use multiple pesticides properly, according to irrigation timing and pest occurrence information, etc., and effectively and efficiently control them.
This time, we visited bulb growers who placed lot testing at our company, and heard about the production system of planting material and disinfection.
It is becoming increasingly important that planting material is clean as pest control in fields is no longer easy. Like growers in the southern hemisphere, many Dutch growers do not use old material and switch to production entirely from scaling. On the work side, the washing and grading line (or facility itself) for the planting material (mother bulb) and the commercial size were separated.
Regarding PlaM virus, chlorine-based disinfection technology for planting material has become widespread and can be controlled.
We confirm the efforts of good bulb growers based on lot testing and customer feedback, and we are sharing information through export companies so that we can continue to supply sustainable bulbs in the future. We value the opinions of the growers, so visit the producing countries every year during the harvest season, and friendly relations and cooperation are growing.
We will do our best to provide you with better bulbs in now and them.