I would like to report the situation of crop 2018SH as following.

It’s been a few months since I visited New Zealand and Chile and made reports of my trip in January and February (summer in the southern hemisphere), and now the preparation for harvesting is going there.  We received some reports from New Zealand about the situation, and I’d like to introduce it to you here.

<Report in the mid-March (end of summer)>

The weather was generally suitable for bulbs’ growth, so we estimate that the result will be good this year.  As I mentioned in my report, the growth was faster, so disbudding was earlier compared to usual years.  In addition, there was rich sunshine from January to March, and the temperature was higher.  Meanwhile, there were some rainy days regularly, so the weather was good for lilies in total.

<Report in the end of April (autumn)>

The weather in autumn was also very good with much sunshine and moderate rain.  The bulbs were growing well which made us happy.  The temperature started to go down from the latter half of April, and the early varieties started to die.

As we can see from these reports, we can expect that this year’s NZ bulbs will be big and powerful thanks to such good condition.

On the other hand, we haven’t had detailed report from Chile yet, but we hear that harvesting has been started at some scale fields in advanced areas as of today in the end of May.  The first part of spring was cool this year, and autumn was also cool with much rain.  There are some worries about bigger sizes’ results.

I am going to visit New Zealand and Chile again in harvest season.  I will introduce you the updated information about the situation.

According to the survey about crop 2018SH’s sales to Japan which we did in April, the estimated import quantity is as the table below. Regarding LA varieties, the number of produced varieties are originally very limited, and both countries have decreased their production year by year.  The loss from out-of-production varieties have already been filled up with Dutch crop.

“Year on Year” rate is a comparison of this time’s result and last year’s survey result (after harvesting).  The rate of Oriental/OT in total is 94.3% (-/- 5.7%) compared to last year.  It can be said that it’s showing cautious attitude considering the world’s market. 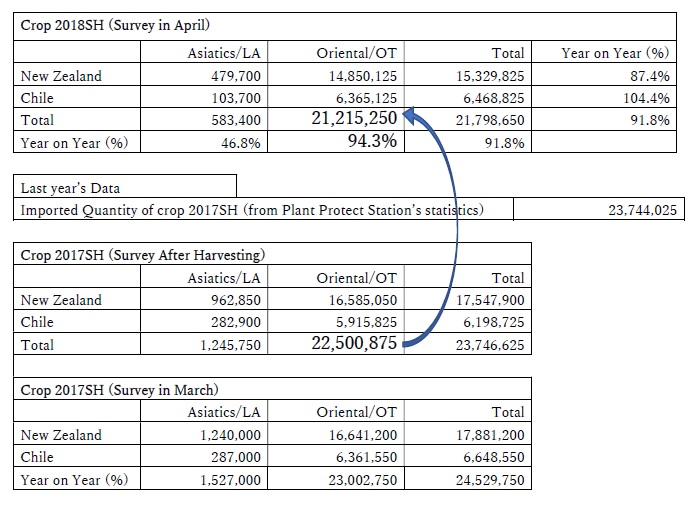 By the way, the Oriental/OT ratio of New Zealand to Chile is changing as follow;

The trade of crop 2018SH started late compared to usual years due to many shortages in crop 2017NL which caused a lot of adjustment until after New Year’s Day.

For pricing, the exchange rate has been weak yen and strong euro compared to last year, so we have taken negotiation carefully to avoid price increase as much as possible.  As a result, the prices were set at the limit line for both exporters and importers.

We decide our prices soon after our purchase is finished, and inform our customers at that point.  We don’t want to make any doubts about the price, so please feel comfortable about it.  Regarding some varieties like Vletter varieties which were still under the price negotiation, we finally finished discussion and we believe that it finished with a good result for our customers.  We decided the prices of those varieties, and also adjusted the prices of old orders according to it.  We hope it will be some help for your good management.

Now, efficiency of harvesting and shipping operation is required for bulb growers.  Exporters started to advise importers to integrate the import channel for specific varieties or transports, too.  These actions will help the cut lily forcers reduce their cost at the end.  Also, constant import is good for quality after long-term storage, so we estimate that this trend will be bigger from now.  We will make the best of our big import quantity and our own cooling storage for flower bulbs to keep stable transports and better service for our customers.

Only 2 weeks to our event, “Lily Fair June”.  Now, we are receiving many entries every day.  The buds in our greenhouse are still green, but we are having more and more visitors day by day.

Lilies are not the only thing which we show you at the event.  We will also have different presentation every year.  This year, we will invite many companies who deal useful agricultural tools, and they will make booths to promote their goods at our event place.  Please come and check it, too.

We have dinner parties at evening during our event days.  We’ve had many participants from outside of Kochi, but these years more Kochi people are joining and helping us entertain other visitors with our local culture.  We very much appreciate those people, and glad that we can make good time together.

We are looking forward to seeing many of you at our event.