Report of Business Trip to Chile

I visited Chile from July 9th to 14th to check the fields’ condition and bulbs’ quality.  I’d like to report it here.

A grower once told me, “In many cases, what happened to Chile crop has already happened in Holland half a year before”.  Chile often has similar characteristics to Holland of the year before such as the tendency of produced varieties and production acreage, climate, and the bulbs’ characters.

As I mentioned in my report of the trip to Chile in March, there is distance of 500km between the northernmost production area and the southernmost place in Chile, so the climate differs depends on the area.  Regarding the season of crop 2018, the temperature was lower in many months in general compared to 2017, and the growers said that both spring and summer were cool.

There was some anxiety about the condition of primary season, but there were only little rain and much sunshine in January to February which are the mid-summer in Chile.  The temperature didn’t go over 30 degrees Celsius, so the bulbs kept growing.  I think that the growth became better in the latter part.

According to my research in this trip, the normal 1 year crop showed rather little swelling, but in total, there were not many small sizes and the bulbs were generally middle sizes.  The 2 year crop (partly 1.5 year) in the north area grew a lot.  Even though much part of the stems above ground were cut in autumn, many bulbs grew too much as over 22cm.  I even found 30cm bulbs.  (Please see the photo below.  The diameter was about 10cm.  It’s very rare to see such a big size.) 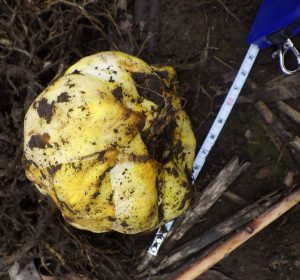 Such tendency of weather and growth is very similar to that of crop 2017 NL (please refer to my report in November, 2017), and I feel a magical connection between them.  Unfortunately, it also applies to the situation of the world’s market, so it will be difficult to sell the sizes which are out of the demand.

It was basically cool after autumn again, and the production areas in the south had early frost in April.  It once became warmer in May, but the dying advanced because of the early frost.  Some growers started harvesting 1 to 2 weeks earlier than usual years.

In June and July, there many sunny days except for occasional heavy rains, so the harvest process went smoothly.  The growers who have small fields had already finished harvesting when I visited.

Because the temperature started to go down earlier, the sprout formation was generally compact compared to usual years.  The comparison between the research result of this year and the average number of the last 5 years became like this;

From the left:  Siberia, Siberia, Companion (these have already been harvested)

The autumn was warm last year, and the dying delayed by 1 week.  In addition, there was a long drizzle for many days in harvest season, so the harvesting process was also delayed.  The growers’ faces were dark with anxiety about sprouting when I visited them last year.  In this trip, the growers were brighter with a feeling of relief seeing the goal coming soon.

Chilean growers have re-produced mother bulbs from tissue in order to make the bulbs free of Plam Virus.  They have disposed all the lots even when they had only a small infection, so many growers are reducing their production acreages this year (and probably next year as well).  What I see when I talked with the growers is that cleaning costs a lot of money, and also reduction of the production is a big damage for the growers.  However, I also see that the revolution is going rapidly and steadily, and the growers have positive attitude to it.

Even when the world’s market is severe, the market always wants high quality.  We have visited Chile and worked together with Chilean people including the hard times for Chilean production to improve the quality.  I appreciate their kind hospitality to share their time when I visit Chile even though they are busy.  We have had close relationship with them for nearly 20 years.  Such long time makes both of us old and grown-up, and sometimes I work with children of old friends now.

I believe that now is the start point for the next 10 years.  We hope to have your continuous support from now on, too.