We appreciate your usual cooperation.

I went on a business trip to Holland.  I’d like to report it here.

As we don’t have data of previous years in similar season, we cannot judge this year’s research result with comparison.  Therefore, we calculated the average numbers of this year’s results, and the photo below is the one which was closest to the average. 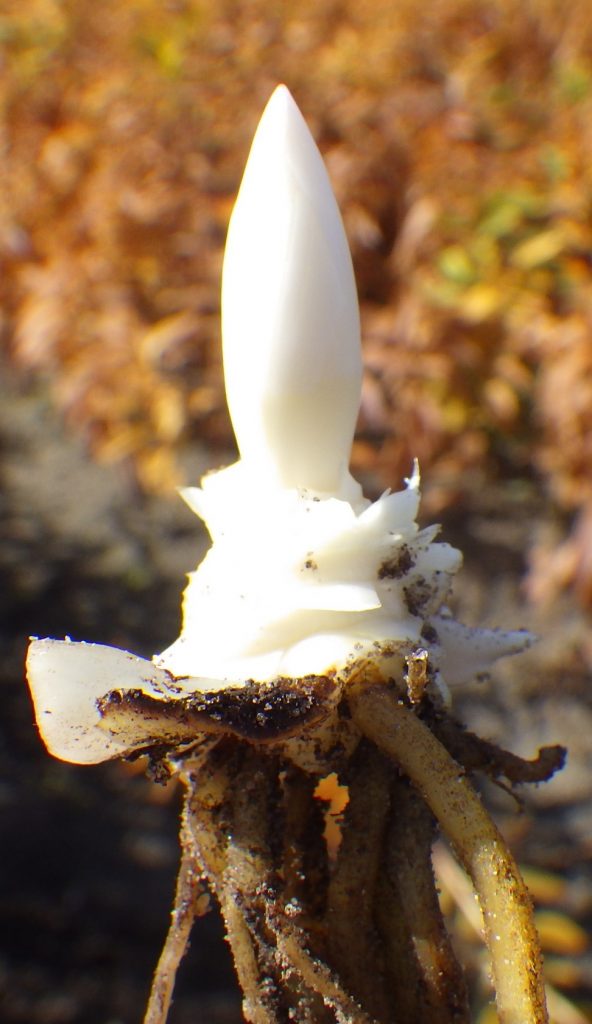 There are more than 1 month to harvest, so the sprout will mature and change by then.  At this moment, the characteristic of this year’s sprouts is what I called “bullet type” in old reports which means “big in the base part”.  This type indicates many bud counts.

Use of small bulbs in early season shows different results every year, so the bud counts can be different from what the sprouts show.  But I think that we can still expect good result (I can’t promise though).

Most of the leaves in bulb fields were green at the point of early October like you see in the right half of the next photo.  It was warm and dry in October, so botorytis didn’t affect the fields.  Therefore, the leaves and stems didn’t die like usual years.

When I visited the fields in the middle of October, the brown area like the left half of the photo was bigger.  The growers said that the color changed quickly in 1-2 weeks.  (This photo is 2 year field.) 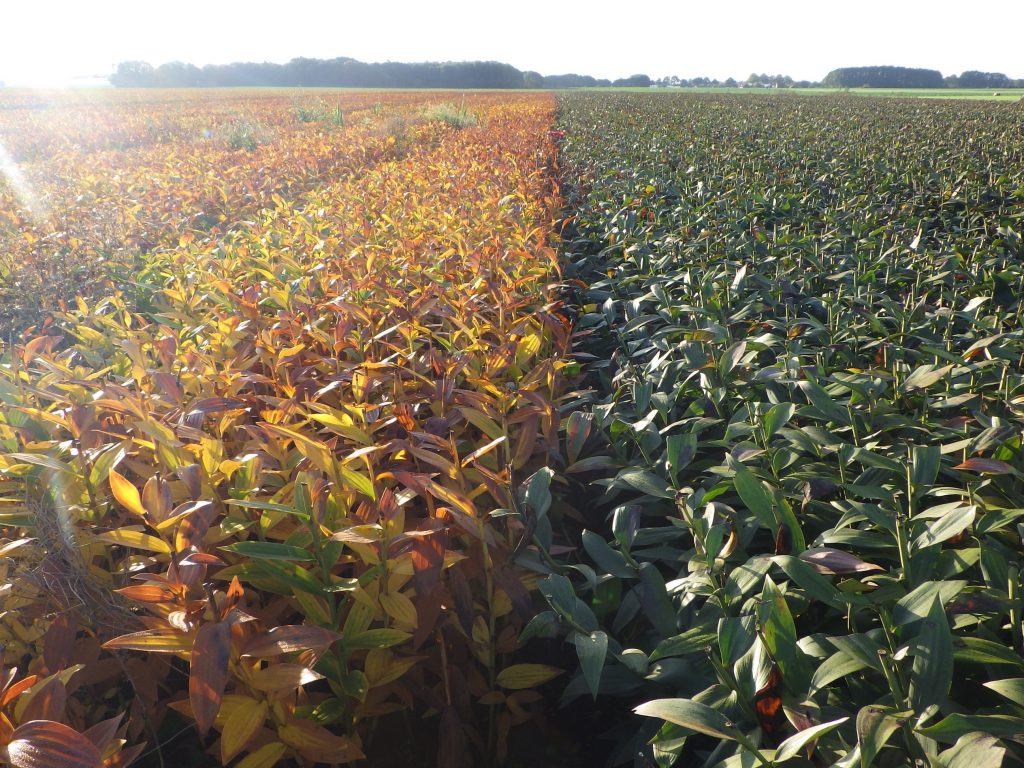 The next photo below shows leaves which are dying.  The leaves are clear and smooth. 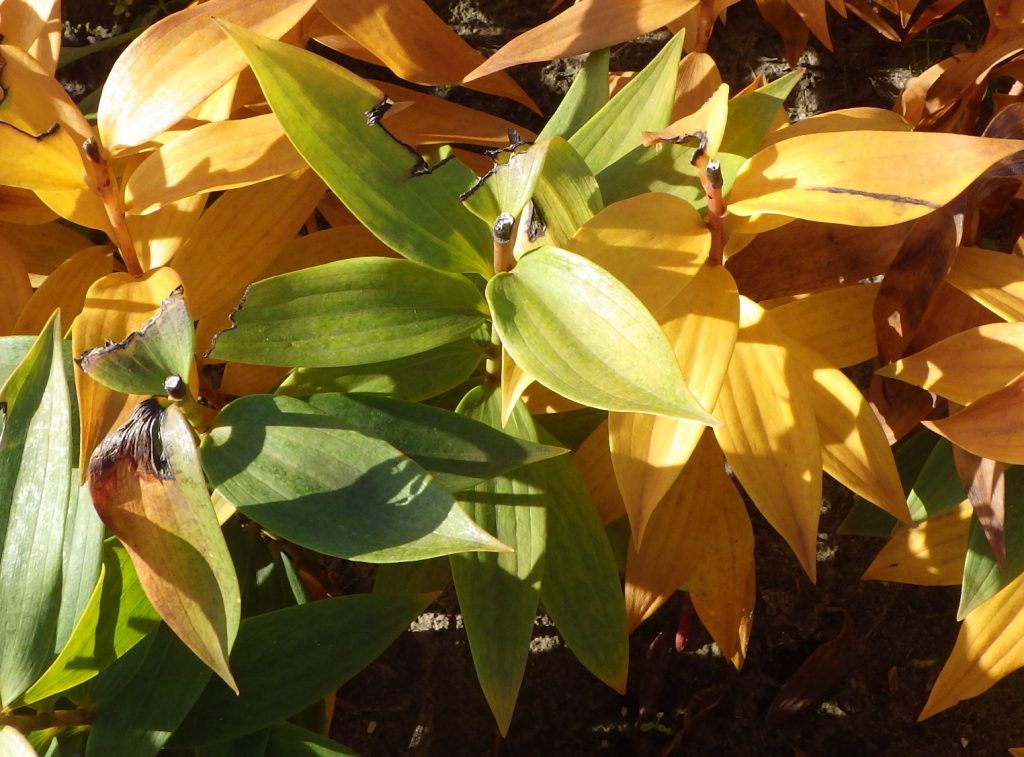 The leaves and stems are dying quickly, but the temperature in mid October went up to 20 to 25 degrees Celsius at highest in Holland as I mentioned in our blog, and it was like summer for Dutch people.  The sunshine was strong, the soil temperature was not low, and I didn’t feel that bulbs or soil were cold when I touched them.  That means that cooling term which is essential for bulbs’ dormancy breaking is not enough and it will take more time to get ready.

We are growing Casa Blanca bulbs in a field next to our lot test greenhouse.  We harvest the bulbs in later summer and early autumn, and the cooling has not been done at all at that point.  In the bulb production areas in warm places, the growers have knowledge to cool bulbs artificially since old times, and they also know the risks of insufficient cooling from their experiences.  The use of Oriental/OT of Dutch or domestic bulbs in January has become much less than before because we have SH bulbs now, and the transit time of the vessel from Holland is becoming longer.

Meanwhile, SH bulbs are hard to store appropriately like this year’s Dutch crop, and some bulbs cannot show their potential abilities if they can’t be stored in appropriate cooling facilities or management.  To fill up the off-crop season, importing new Dutch bulbs earlier can be seen good, but using new bulbs earlier has more risks year by year because of the global warming.

In the table in the section 2, I mentioned “Grower’s schedule book” as the related elements of harvesting time.  I meant that the date to start harvesting is already decided for some growers regardless the weather, because the dead line of harvesting is pre-set due to Christmas holiday.  This year some parts of LA varieties started to be harvested in the temperature over 20 degrees C in early October.  They advance the process according to the decided schedule, and the bulbs will be shipped as usual years if the bulbs arrive at the export companies in time.

There is a word “anomaly”.  This means something which is different from usual and can’t be explained logically.  The quantity of bulbs from Southern Hemisphere, the quality after late forcing storage, cooling of Dutch crop, and tolerance to long storage might be connected in some points.

When we think about domestic terminal of bulbs’ distribution, specialized cooling facilities for flower bulbs and management efforts are becoming more and more important as the global warming advances.

While Halloween on October 31st is becoming famous as a disguise festival in Japan, “November 1st” is famous as a big demand day of flowers for “All Saints’ Day” in Catholic countries.  It’s similar to Japan’s “Obon”, and people place flowers on the graves of the departed people.  I heard that this custom is becoming more popular in Holland.

This is related to “Day of the Dead” in Latin America, which is portrayed in a Disney-Pixar movie “Coco” (Japanese title “Remember me”).  This movie tells me the connection between humans and lives, respects and dignities to the ancestors, and understanding myself.  I thought that it’s similar to the image that lily has.

– The last trial of Dutch crop in the Heisei period.

– The biggest number of the varieties in Japan (414 varieties)

– You can touch lilies.  Please feel stems’ hardness in the middle row.

– We also show some experiments about treatment of cut lilies.

We hope to see many people from lily forcers, other flower industries, and their families and friends at our event.