I went on a business trip to Chile and New Zealand in the first half of July and investigated the production area of lily bulbs exported to Japan.

Chile and New Zealand are far apart, but the weather patterns are similar this season.

A. Spring to early summer

In Chile, a late frost occurred in October in a production area in the south, and some were damaged by hale.  On the other hand, because it was cool and rainy, there were generally thick and long roots, and the photograph (commercial size) is the bulb that was the longest root in the survey in early February that I visited last time.

In NZ, there was no effect of frost, and the growth was about the delay of disbudding time.

Quite some NZ crop 2019 was “winter planting” had been planted at the harvest time (June-August), and there was an early start, and there was steady growth without delay.

When the cool spring was over, it became extremely hot from late January, and both countries had less rain and abundant sunshine, and the producer continued to water hard.

The photo shows a pivoting type of circular watering facility, which is a picture of the Los Angeles area in Chile.

In Chile, due to the Feen phenomenon from the Andes, hot, dry winds lasted for several days, and it was said that the highest temperature in history has been observed in many cities south of the capital Santiago.  Even in the bulb producing area, the maximum temperature was 37 degrees Celsius or higher, and there were days of 27 to 30 degrees C at night.

Even in NZ, when the temperature was high in summer, there were days such as 36 degrees C in Rakaia and 20 degrees C in the night temperature, and the ultraviolet light unique to NZ was strong, and it quickly recovered from growth delay.

Both countries continued to have a warm climate until late autumn.

In Chile, there was no deep frost in April and May, and the above-ground parts continued to grow long while maintaining green.  Some producers say that they have applied insecticide to the latest in the past 10 years or more.

In NZ, it was warm from March to May, and it was generally dry with little rain.  If enlargement can be secured during the growing period, they will mow the ground part short, but many fields were carried out in April, which is a little later than normal, and were not carried out with small planting material.

In Chile, there are occasional heavy rains and intermittent light rains, but there are many places where the production are has decreased compared to last year, and the progress of harvesting is at the average level.

NZ is in winter with dry and warm as autumn, there is almost no rain and harvesting is in progress.  However, due to the limited amount of grading work in the warehouse, the end of grading is likely to be about one week earlier than normal.

Although the harvest results are informed for each variety after grading, the surplus / shortage of each size affects the sales situation of the export company as well as the gap between the production prospects and the harvest results.  We will promptly report to you if we need to make adjustments, and we will supply you and an alternative.

Thanks to the cooperation of Chilean and New Zealand producers, we were able to check and measure many lot and sprout formation in this year as well.

You can tell the power of the bulb of the year by looking at the state of sprout formation, but the degree of bud formation varies depending on the variety, cultivation method, fertilization, climate, harvest time and so on.

The table below compares the average survey data with the previous year to see general trends.

Next, I will introduce photos of sprouts close to the survey averages of the two countries. 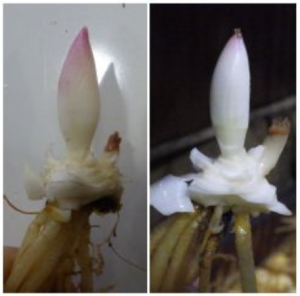 This year’s sprout has a shape compared to the stem width (the narrowest part).  The reason for the wider sprout compared to crop 18CH is considered to be the effect of a longer autumn climate.

The sprout width is not very fat and it has a slim shape.  The thickness of the sprouts is about between NZ crop 17 of less bud count and NZ crop 18 of relatively more.  I think it is a relatively calm sprout because the climate is good and bulb enlargement has progressed to the end.

For four to five years, Chilean growers refrained from renew the material from the Netherlands as much as possible, abandoned the virus infection lot and switched to production of mother bulbs from tissue.  Large-scale growers invest in tissue that is an order of magnitude different from Dutch comparable producers, and I think it is unbelievable for bulb producers in other countries.  It is really great that each grower spent a lot of money, and the entire process worked out for quality purification.

Furthermore, for the 2020 production, the introduction of new (more rigorous) quality inspection methods is being promoted by producers’ organizations and the Chilean government, and it is said that it will be reliable for export countries.

Decrease in production and balance of supply and demand:

The world of bulbs is said to be several years earlier than the world economy, but the impact of the Asian shock that began in the second half of 2017 is significant, and the production area has dropped significantly throughout Chile.  Some of them have been hit by the recovery of sales, and some companies can not continue their management with their own strength.  Japan is appreciated for keeping normal transactions and promises once again. Although the number of Chilean bulbs imported into Japan has decreased since before, the number of companies involved has decreased, but I feel that there is an element in which more stability and trust can be built.

In the past few years, the Lunar New Year’s date has advanced from February 16, 2019, February 5, 2019, January 25, 2020, and new lots from tissue takes about 5 years to be commercial production, acreage continued to decrease overall.

But in the future, I think that global demand as well as quality will recover and production and sales can be balanced.

Although the planting density is high compared to general Dutch bulb production, the blessed climate where the enlargement is one size larger, in addition, the area of winter planting is further increased in the last few years, and a very good harvest result continued from last year.  The number of two-year grown bulbs next year 2020 is expected to be small, as many of the first-year fields in two-year cultivation have become salable size at Van Zanten NZ, and many can be harvested this year.

As there is little rain this year in the harvest season and the harvest speed is fast, winter planting has progressed between work, and a virtuous cycle has already begun for next year.

The photograph is a case (bin) of planting materials that has been planted.

New Zealand is a very important producing country in winter-spring cut flower production in Japan, and we have a long and good relationship with a bulb producing company that we cooperate with.  This year, the next generation of young man from Bakker (Netherlands) chose us as a training place and participated in the exhibition Lily Fair June.

Van Zanten has also shown an understanding of the benefits of producing new varieties early in the southern hemisphere in promoting own breeding varieties, and bulb production has begun.

We play an important role in handling Southern Hemisphere lily bulbs in Japan and we will continue to visit the bulb production of Chile and New Zealand, to interact with the people who work there, and cult flower growers in Japan.  We aim to create a constructive relationship by connecting all of our members.

We look forward to your continued support of our activities.