Thank you very much for your special attention.
I visited Chile and New Zealand in the first half of February to conduct field surveys, and I would like to report below.

①About the climate
The climate patterns in both countries are similar this season, with the following average impressions:

Ａ：In Chile, some fields suffered late frost in the early stage of growth last year, causing damage. However, this year, the spring was relatively warm, the frost was light, and protecting measures were taken. The enlarge at the time of the survey was on average about 1 cm larger than last year, on the other hand, bulbs cultivated for 2 years (some 1.5 years) showed less overweight bulbs seen every year, so they were well controlled in the salable bulb size.

Ｂ: In New Zealand (South Island), winter planting is increasing year by year, leading to the recent good enlarge in size (the highest harvest in 19 years). On the other hand, the enlargement of the part that has been planted late due to the work is less growth. The average enlarge was about 1 cm smaller than the same period last year.

Ｃ: Hail fell on some fields in the Rakaia district of NZ on November 23, causing damage.
The right photo is Vendome NZ.
The damage seemed lighter than expected, but It’s worried about how they will affect the enlargement in the second half, and already adjusted the production output. 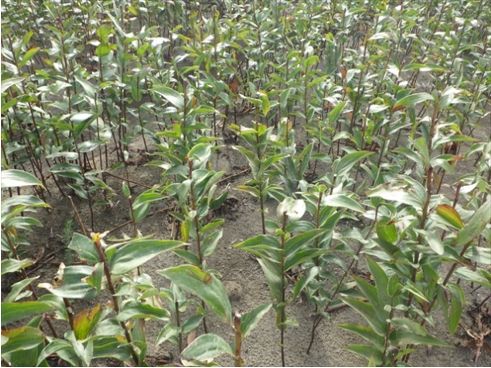 Summer：High temperatures and drying have burned vast forests in Australia is known by the news, there is little rainfall in New Zealand too.
Chile is long from north to south, with the Atacama Desert in the north and the Patagonian glacier in the south, but the capital city of Santiago, located in the middle, is drought every year.

The photo shows a dam in Santiago.
Left photo: same period last year (Drought was already a problem).
Right photo: You can see that the situation is more tough this year.
At present, in order to ensure a stable supply of water, construction of a water supply pipeline from the south, where water is abundant by the snowmelt (where bulb production is located), and desalination of seawater etc., are being considered.

In recent years, it has become common that rain does not fall for about one month in summer in the bulb production areas of both countries, but bulb producers continue to provide sufficient irrigation. At the time of the visit, the bed kept moderate humidity and bulbs grew under abundant sunshine.

②Cleaning out the bulbs
Four to five years ago, Chilean producers abandoned the virus-infected lot and switched to producing from tissues. Larger producers invested 10 times more of tissue than Dutch producers of the same size, and I think it’s hard to believe bulb producers in other countries. It’s really nice that each producer has a considerable cost and the choice of quality purification as a whole.
In New Zealand, planting material are often imported from the Netherlands, and infected lots can enter unexpectedly. As with coronavirus, which has become a global problem at this moment, they are taking measures to control the border by using PCR, but it is difficult to completely prevent it due to the limitations of sample testing. There are several lots of virulent symptoms in the southern hemisphere in 2019, and we are exploring the route of infection, but it has been pointed out that bulb washing (especially outsourcing that can’t be controlled by ourselves) required for export is high risk.

We communicate the results at our lot test and the customer’s green house to the exporter / bulb producer, encourage information sharing and quality confirmation, and continue to work with a high awareness of quality.
Every producer is an important supplier to us, so we believe it is more important to fight together than to criticize or evacuate. 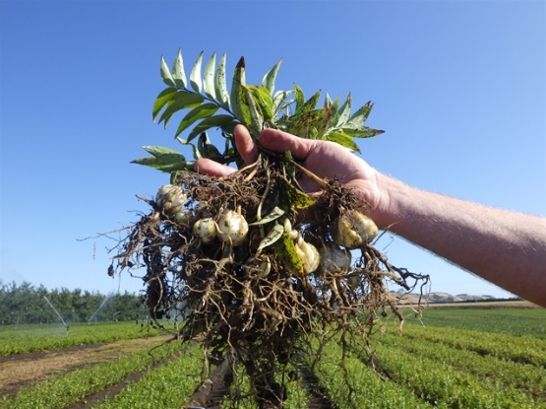 Photo: Production of scales in New Zealand (naked scale method).
I’m looking at the scaling field as a reference for the expected production in 2021.
Under abundant sunshine, excellent planting material are made and productivity is very good.
There is no post-harvest transport and the production system is low stress for the bulbs too.

③Decrease in production and demand & supply balance
It takes about 5 years for a new lot to become a salable size from a tissue, and it takes time to expand the production area. It is said that the world of bulbs industry is several years earlier than the world economy, but the impact of the Asian shock that occurred around 2018 was large, and there were stories that some of them were damaged by the collection of invoice, and two Production companies in Chile withdrew from bulb production this year. Once again, Japan, where the situation is stable, is highly valued.
In New Zealand, sales are expected to decrease due to factors such as the first year of two-year cultivation was harvested in good growth last year.

Impressions from conducting field surveys indicate that production has been concentrated on demand varieties. This is a trend that has already been seen in Dutch 2019. (For details, please refer to “Statistics of Dutch Acreage in the Netherlands (Preliminary)” on August 6, 2019)
For example, although Siberia is said to be declining in production, we have been offered more than last year to our company, and each bulb producer had sufficient supplies in the initial order. In Chile, Sun Harvest, which has a reputation for quality, has resumed production, and Andes Bulb’s (formerly Chile Bollen) production has been taken over.

Global demand is expected to increase in Southern Hemisphere, with shortages from the Netherlands crop 2019 and a relatively slow lunar New Year (February 12) in 2021.
On the other hand, the supply of bulbs from the Netherlands to Asia may be lagging behind due to turbulent ship schedules in recent months, which may have an impact on demand in the Southern Hemisphere.

④Review the logistics from the perspective of warehouse work
In recent years, labor shortages and rising production costs have been reported in Chile and New Zealand. Bulb producers are striving to reduce costs by simplification of shipping (export) lots, stabilizing labor during harvest and improving efficiency.
In order to avoid complicating work of local shipping staff and increasing the number of necessary procedures, Southern Hemisphere’s products, such as varieties with low production volume and new varieties, have already been sold to limited destinations (countries and importers).
In Europe, this trend is likely to emerge in the future, because it is advantageous to connect the logistics chains (bulb producers-exporters-importers-cut flower producers) with simple thick pipes.

Last year, while the number of imported SH bulbs in Japan has decreased, we have slightly increased our handling, which has led to the trust (high allocation) of export companies.
We also checked the acreage of the field in each country, but for the varieties that were highly inquired compared to the production, we were not able to secure a sufficient amount, and are reporting the change in quantity while we are sorry. We will guide you through the replacement, so please cooperate with the adjustment. Although it is a little effort, we will do our best while working closely with the export company to lead to better planting plans for everyone.

The bulb price from the southern hemisphere in 2020 has been carefully negotiated between the bulb producers and the export company, and it seems that part of it will take a little longer before the official decision is made. The range that has already been decided will be able to provide customers with price under favorable conditions, including currency control, and taking our advantage of economies of scale.
Thank you for your cooperation.